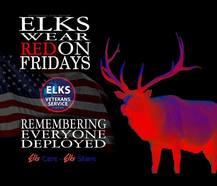 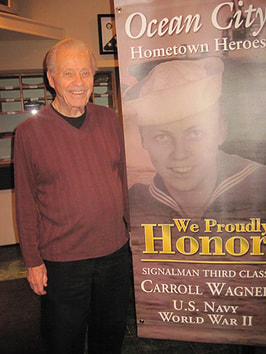 PSP CARROLL WAGNER, PER, PDDGER
~ OCEAN CITY, MD LODGE #2645:
Started in the summer of 2014, the Ocean City Elks and the city of Ocean City, Maryland, have honored local active-duty armed forces service members every summer with larger-than-life-size portraits hung along the city’s popular boardwalk that recognize them as “Hometown Heroes.” The banners remain up as long as the good weather lasts, from early May through the beginning of October. In late October, the Ocean City Lodge hosts a ceremony during which the banners are presented to the honored individuals or their families.

This year, for the first time, the program will also honor local WW II veterans. Fifteen of the banners will show local active-duty service members and fifteen of the banners will honor WW II veterans using photos that were taken during the war. The banners were unveiled following an opening ceremony at the Firefighters Memorial on May 5, and the honorees will be presented with their banners in a ceremony hosted by the Ocean City Lodge on October 22. Pictured with his banner (upper left) is Ocean City Lodge member and WWII Veteran Carroll Wagner (PER / PDDGER / PSP).

"...SO LONG AS THERE ARE VETERANS,
THE BENEVOLENT & PROTECTIVE ORDER OF ELKS
WILL NEVER FORGET THEM."

Back to Home Page